Wayne Rooney had something of a shocker in first start for D.C. United

To be fair, Wayne Rooney has not had a full preseason to get his match fitness up to scratch.

Rooney definitely looked like he was lacking his usual sharpness when he made his first start for new club D.C. United on Saturday night.

Having come off the bench for his debut last weekend, he was given a starting place against Atlanta United this time around but even he would admit that he struggled.

Rooney's new side fell to a 3-1 defeat to the hosts, leaving D.C. United with just 14 points from 16 games this season, and the former Manchester United and Everton forward was directly to blame for Atlanta's equaliser.

After Zoltan Stieber opened the scoring for the visitors, three unanswered goals arrived for Atlanta and the first saw Rooney play an aimless ball into midfield, where it was snatched upon by an opposition player and the ball was soon in the back of the D.C. net.

Wayne Rooney is Amazing thank u Everton for letting him grace the MLS . Never seen such technical ability. He can’t hang in the MLS. He should have gone to Swansea in the champ pic.twitter.com/t5HtibxJcH

The ex-England international had the opportunity to make up for his error with a free-kick from the edge of the box just moments later but his effort was smacked into the wall and the less said about the follow-up shot, the better.

Wayne Rooney has found some form in the states 🇺🇸 pic.twitter.com/blF1I5OncH 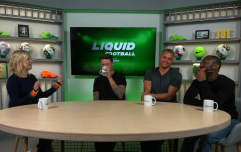 END_OF_DOCUMENT_TOKEN_TO_BE_REPLACED

We got a glimpse of Rooney's short temper after half-time when he lashed out at defender Michael Parkhurst, which earned him a booking.

It was clear for all watching that it wasn't going to be Rooney's day and he was hauled off with 25 minutes remaining.

At least things can only get better for the 32-year-old...

It’s going to take Rooney a while to fit in, so a lot of this is to be expected, but he’s been downright awful today. #DCU

Rooney having a shocker of a game for DC tonight

Rooney has been finished for some time now, so bad now he can't even compete in the MLS. I've said for few year he's finished and been shot down. He covered up how bad he was for years by scoring penalties. Sad how badly his career went down hill really, got to think 🍺 to blame


popular
The 11 unbreakable rules of making a cup of tea
Who is the most handsome footballer in the Premier League?
The JOE Friday Pub Quiz: Week 203
Young guys absolutely lose it hearing Phil Collins' In The Air Tonight for the first time
Juventus' appointment of Pirlo proves meritocracy in management is a myth
England could lose several promising youngsters to Jamaica
Can you guess who Noel Gallagher is slagging off?

You may also like
Sport
Antonio Valencia appears to confirm his next club on Twitter
Football
Wayne Rooney sent off for abysmal tackle with DC United 3-0 down
Sport
Wayne Rooney turns back the years and bangs in free-kick strike from crazy angle in MLS
Football
Wayne Rooney believes Louis van Gaal was tactically better than Sir Alex Ferguson
Sport
Paul Pogba is perfect for MLS, claims Wayne Rooney
Next Page