As someone who has played in a variety of leagues of differing quality, Robbie Keane knows a top striker has to give his all whatever the circumstances.

Keane has scored goals wherever he has been given the chance, be it the Championship, Premier League, Champions League, Scottish Premiership or Major League Soccer (Yes, we're choosing to ignore his brief and goalless Serie A spell). 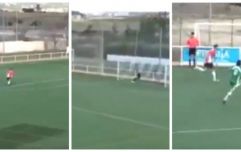 END_OF_DOCUMENT_TOKEN_TO_BE_REPLACED

Or, as it turns out, his back garden.

The Ireland international, who played his last game for his country in 2016, has been known throughout his career for his overexuberant celebrations.

He might no longer have the cartwheel and forward roll combo in his arsenal, but Keane won't avoid overcelebrating a goal - even if the keeper is his young son.

We're not sure what's better about this clip, the top-corner finish or the Alan Shearer-style raised-arm.

Just kidding, it's neither of these things. The highlight is the look of utter dissatisfaction and bemusement on the face of Keane junior after the ball hits the back of the net. 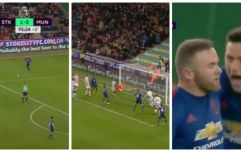 END_OF_DOCUMENT_TOKEN_TO_BE_REPLACED

Keane has been without a club since leaving Los Angeles at the end of the last MLS season, having scored more than 100 goals for the club in all competitions.

If this is his way of auditioning for a new employer, he has certainly shown that his passion for the game is still there.

popular
Dad who left partner for Ukrainian refugee is now her full-time carer after she became partially blind
Tariq Lampety switches international allegiance ahead of Qatar World Cup
Elon Musk secretly fathered twins with his top executive, according to court documents
Premier League club faces call to suspend international player over rape allegations
Bizarre moment Flash star Ezra Miller offers to 'knock out' store worker who wanted a selfie
England women's squad to discuss changing white shorts due to period concerns
Met Office delivers verdict on rumoured 41C scorcher in UK next week
You may also like
Sport
Can you name every Premier League goalscorer from 2016?
Sport
The Premier League has four days left to match the best Goal of the Month contest ever
Sport
We knew nine months ago that these were going to be the final three Puskas contenders
Sport
The best goal of the weekend came on a university gridiron pitch
Sport
Paul Pogba scored a 30-yarder for France just because he can
Next Page