The wait is nearly over for Spurs supporters

With the opening of their new stadium coming up against a number of setbacks over the last few month, Tottenham are finally close to playing their first official game there.

END_OF_DOCUMENT_TOKEN_TO_BE_REPLACED

Before they do, they will need to hold two specially arranged Test Events at the ground so they can be granted necessary safety certificates.

Confirmed last week, the first game will see Spurs' Under-18s take on Southampton at 3pm on Sunday 24 March, with a capacity of around 30,000. This will be followed by a Tottenham Hotspur Legends match, kicking off at 5.30pm on Saturday 30 March. This game will be played in front of 45,000 fans.

Details of that Legends match are now emerging, with the club confirming that Dimitar Berbatov, Robbie Keane and Rafael van der Vaart are amongst those who will feature in the game. 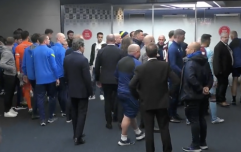 END_OF_DOCUMENT_TOKEN_TO_BE_REPLACED

"It means such a lot to me to have the opportunity to play in this game," said Keane, who had two spells at the club between 2002 and 2011. "Spurs is obviously a club that I hold very close to my heart and I have so many great memories of playing for the Club over the years, but to see the new stadium and how good it looks, it’s going to be absolutely unbelievable to play inside it as one of the first players ever to do so. The stadium is incredible and I can’t wait to get out there and play in it."

Spurs have been playing their home games at Wembley since leaving White Hart Lane at the end of the 2016/17 season.