The 29-year-old former Olympic champion lost his IBF, WBO and WBA world heavyweight titles as he suffered his first defeat in professional boxing, despite having begun the fight as a 1-25 favourite with bookmakers.

"I got beaten by a good fighter," said 29-year-old Joshua in the fight's aftermath. "It will be interesting to see how far he goes, but this is all part of the journey.

"He's a champion for now, I shall return."

There is a sense that this was not meant to happen. Ruiz took the bout at six weeks' notice and in the build-up to the fight, Joshua spoke about the need to deliver a decisive victory that would set him up for facing off with Deontay Wilder in the coming months Instead, he found himself put on the floor four times before the referee finally decided enough was enough.


Before the fight, Joshua had told JOE about his desire to set up his long-awaited fight against fellow Brit, Tyson Fury, following a lengthy war of words of social media, but the result means a rewriting of the heavyweight division's presumed plotlines. Joshua's next fight will now be a rematch to try to reclaim his titles. 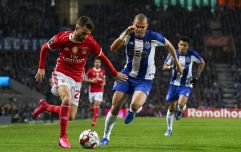 Behind the scenes at FC Porto vs Benfica

END_OF_DOCUMENT_TOKEN_TO_BE_REPLACED

Although this means fans will have to wait even longer to see the two British heavyweights face off, Fury, who is currently preparing to fight Tom Schwarz in Las Vegas, had a classy response to Joshua's shock defeat.

The Gypsy King tweeted: "We have our back and forths but Anthony Joshua changed his stars through life. Heavyweight boxing, these things happen, rest up, recover, regroup and come again."

We have our back and Forth’s but @anthonyfjoshua changed his stars through life. heavyweight boxing, these things happen, rest up, recover, regroup and come again 👊🏼


popular
The FootballJOE Quiz: Week 1
Here's how to recover all your deleted Facebook photos and messages
Personality Test: Which Brooklyn Nine-Nine character are you?
A definitive ranking of every swear word from worst to best
Remember 'The Game'? Well congratulations, you just lost it again
This is how much time most men need after orgasm before they're ready for another round
Race to Amsterdam: Luxury train vs budget plane

You may also like
Sport
Ruud Gullit on why Virgil van Dijk will never win the Ballon d'Or
Sport
Will football ever solve its racism problem?
Sport
Alessandro Del Piero on why he loves this Liverpool team
Fitness & Health
Hitting the gym with Adam Bishop - Britain's Strongest Man
Sport
Team GB Olympic athletes tell us what love means to them
Next Page