It's tiring work trying to keep up with the latest trends.

With the advent of smartphones and the 24-hour news cycle, things can go out of fashion as quickly as they appeared.

END_OF_DOCUMENT_TOKEN_TO_BE_REPLACED

For most of us, that means we might accidentally call something fetch when all our mates know that we need to stop trying to make fetch happen because it's not going to happen.

But for big brands, the penalty can be so much more than just losing face in front of some friends and looking at little behind the times.

Not only do you lose your cool young person credibility, but you might accidentally end up insulting everyone who saw your attempt to be one of the kids.

And we don't just mean offending them with your cringe-worthy tactics. We mean actually offending people.

How? We hear you ask. Well, maybe by misunderstanding what specific emojis are and accidentally tweeting out the middle finger to the 12.3m followers of the official Uefa Champions League Twitter account. 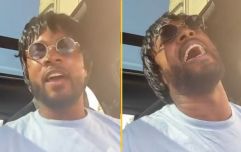 END_OF_DOCUMENT_TOKEN_TO_BE_REPLACED

In a now-deleted tweet, the social media manager of Europe's premier club competition apparently thought the middle finger emoji was a simple index finger pointing up.

In an attempt to let the fans of Borussia Mönchengladbach enjoy their side's 6-1 thrashing of Swiss side Young Boys to book their place in the group stages of this year's tournament, they shared an image of goalkeeper Yann Sommer with his finger raised.

It was a simple mistake, but it led to the highlight of the night.

popular
Olympic Kayaker Nathan Baggaley sentenced to 25 years in prison
Bob Odenkirk hospitalised after collapsing on 'Better Call Saul' set
New video of Wayne Rooney on night of ‘stitch up’ pics emerges
QUIZ: Can you name these 5 players from their career paths?
Conor McGregor deletes disgusting tweet about Khabib's dead father
Simone Biles pulls out of all-round individual final to 'focus on her mental health'
Man who claims he’s Charles and Camilla’s child is now using his son as ‘proof’
You may also like
Sport
Thomas Tuchel says Frank Lampard helped Chelsea get to Champions League final
Sport
Champions League final could move to Wembley after UK travel list announcement
Football
Aston Villa offers to host Champions League final between Man City and Chelsea
News
Super League: What are they proposing and why are people so angry?
Sport
UEFA approve Champions League reforms for 2024
Next Page