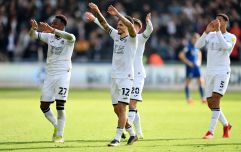 END_OF_DOCUMENT_TOKEN_TO_BE_REPLACED

The team's social media blackout will commence this evening at 5pm, it has been revealed.

This comes after several footballers, including the French forward, Thierry Henry, stepped back from social media as a result of experiencing racial abuse online.

Henry, who spoke about his temporary departure from social media on Good Morning Britain, told the show's co-hosts that the "sheer volume of racism" on social media channels was "too toxic" to ignore. He said he will remain off social media until the "people in power" begin to tackle the problem of harassment and racist abuse on social platforms.

The decision by Swansea FC to step back from social media for seven days is "club-wide", the football club announced on Twitter.

Swansea City has chosen to take a club-wide stance in the battle against abuse and discrimination of all forms on social media.

From 5pm today we will not post any content on our official social media channels for seven days.#EnoughIsEnough

In a statement posted on their website, Swansea City FC said: "As a football club, we have seen several of our players subjected to abhorrent abuse in the past seven weeks alone, and we feel it is right to take a stand against behaviour that is a blight on our sport, and society at large. 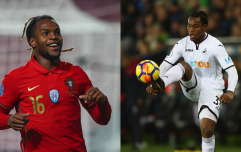 END_OF_DOCUMENT_TOKEN_TO_BE_REPLACED

"We will always be unwavering in our support of our players, staff, supporters and the community that we proudly represent, and we are united as a club on this issue.

"We also want to stand with players from other clubs who have had to endure vile discrimination on social media platforms.

"As a club we are also acutely aware of how social media can impact on the mental health of players and staff, and we hope our strong stance will highlight the wider effects of abuse."

Swansea City captain, Matt Grimes, issued a statement, which was also posted on the club's website, in response to the growing problem of racist abuse online.

He said: "Three of our squad have been racially abused in recent weeks and, as a squad and club, we wanted to take this stance as we again call on those at the forefront of social media companies to implement the change that is needed now and in the future.

END_OF_DOCUMENT_TOKEN_TO_BE_REPLACED

"I find it staggering that we are still talking about racism and abuse of this kind. We are acutely aware of the pressures within football at this level, but it shouldn’t be underestimated as to how such levels of abuse can affect someone."

The team's captain said that while social media has provided "many positives" over the past ten years, "the sickening and vile abuse" that occurs on a regular basis is "wholly unacceptable".

He added that he hopes the club-wide stance will be supported by the public.