We're not kit designers. We're not going to try to get into the mind of a kit designer and figure out what makes them tick. It's not our jobs. 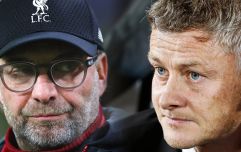 END_OF_DOCUMENT_TOKEN_TO_BE_REPLACED

But sometimes, once a year in fact, a number of new kits emerge which make you ponder the moves behind the design process, asking such questions as 'what is this?', 'who came up with this?' and 'what am I supposed to do with it?'.

This is a question that many people appear to be asking themselves in the wake of the launch of Tottenham Hotspur's new home kit.

Even before we got to actually see the kit there was the prospect of watching the unveiling video for Spurs' new home kit which, when you watch it first, looks unerringly like the opening sequence of Brasseye.

At the end of the ludicrously long intro comes the kit itself, which - in the interest of public service - we've kindly placed below. END_OF_DOCUMENT_TOKEN_TO_BE_REPLACED

While there were some predictably angry reactions to this piece of clothing (see below) there were also some more focused critiques, specifically based on the fact that the kit makes the Spurs' players look like they're wearing shorts up to the bottom of their rib cages.

Spurs’ new kits are not the one 🤢 the training wear is OK but is it not the same as England’s? Poor effort from Nike #COYS


The new spurs home & away kit is fucking awful

New kits out not sure yet but a kit is a kit long as you win #Coys #thfc #spurs #newkit pic.twitter.com/jSgcbX6cYF


So, this is the new #Spurs home kit. What's with this new craze of making everyone seem like they have really long shorts? Other than that, it's not too bad at all. #THFC #COYS pic.twitter.com/0aOKxlsaT1

The best critique, undoubtedly, came from a Twitter user who likened the new kit to the sort of outfit worn by young Victorian boys born to wealthy families, who are typically seen haunting big houses by the sea in major Hollywood horror films while whispering "mother, why am I so cold?".

Don't know if it's the high waist short illusion, or the fake collar, but... #builttorise #watchusrise #coys #nike #spursnewkit pic.twitter.com/ufHNBXwiJt