Tottenham have been handed an unexpected boost

Son Heung-min and his South Korea teammates have been knocked out of the Asia Cup at the quarter-finals after suffering a surprise defeat to Qatar.

The Qataris won the game in Abu Dhabi by a single goal, scored 12 minutes from time by Abdulaziz Hatem.

Though a major disappointment to Son, news of South Korea's earlier than anticipated exit from the competition comes as a  timely boost to his club.

Tottenham lost Harry Kane to an ankle injury in the closing stages of their 1-0 defeat to Manchester United earlier in the month and is only expected to return to training in early March. Following this setback, Spurs also lost Dele Alli to a hamstring injury during their 2-1 win at Fulham at the weekend. 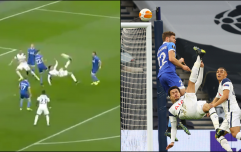 END_OF_DOCUMENT_TOKEN_TO_BE_REPLACED

With the two England internationals sidelined, Maurico Pochettino will be relieved to have Son available selection in the near future. Though he is not expected to be back in time to be in contention for Spurs' FA Cup game at Crystal Palace on Sunday, there is now a possibility that Son could feature in the home game with Watford on Wednesday evening.

Failing that, he will almost certainly be ready to play in the game against Newcastle on February 2 - the same day as the Asia Cup final many expected him and his international teammates to be playing in.

Tottenham are also set to assess the fitness of Moussa Sissoko and Ben Davies ahead of the game at Palace this weekend. Both picked up injuries during the Carabao Cup semi-final defeat to Chelsea on Thursday evening.