The world's biggest basketball league, the NBA, has announced its first-ever partnership with Sky Sports.

The four-year deal boasts the most extensive coverage of the NBA ever seen in the UK, and will feature more than 170 live games and a record number of live weekend primetime games starting from 8.30pm.

According to Sky Sports: "The new season is just hours away, tipping off on Wednesday morning with a star-stubbed double-header headlined by the defending champions Golden State Warriors and their superstar Steph Curry beginning their defence of the title at home to Oklahoma City Thunder.

"Prior to that game, the season and Sky Sports' coverage begins at 1am with the Philadelphia 76ers visiting the Boston Celtics - the culmination of a blockbuster start to the season that will feature 48 hours of continuous action on a special Sky Sports Arena takeover." 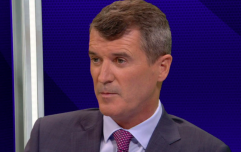 END_OF_DOCUMENT_TOKEN_TO_BE_REPLACED

There are plenty of talking points ahead of the new NBA season, including LeBron James' first ever season with the LA Lakers.

The partnership will also see live games and highlights of the WNBA (Women's National Basketball Association) starting with the 2019 season that tips off in May.


popular
QUIZ: Can you guess the Champions League crest from just its colours?
Here's what they don't tell you about being a contestant on Pointless
Inside what used to be Britain's most secure police station
QUIZ: Name the obscure characters from The Simpsons
What will England's Euro 2020 squad look like?
The JOE Friday Pub Quiz: Week 178
The definitive ranking all 151 original Pokémon from worst to best

You may also like
Sport
How Chris Kamara missed that red card on Soccer Saturday
Football
In appreciation of Sky Sports' pundit Mount Rushmore
Politics
Ian Holloway has a long history of talking gibberish, and his Brexit gaffe is nothing different
Entertainment
WWE moving to BT Sport is truly the end of an era
Sport
Paul Merson claims Ole Gunnar Solskjaer could be sacked if Manchester United lose to Cardiff
Next Page