Roy Keane has revealed that one of the reasons he chose begin punditry was due to a horoscope reading which told him to "stop saying no to people." 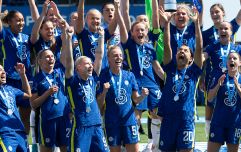 END_OF_DOCUMENT_TOKEN_TO_BE_REPLACED

Keane explained the story during a live instalment of Gary Neville's popular YouTube show, The Overlap, as he told the tale of his rise to punditry.

After the Irishman had been sacked by Ipswich Town in 2011, he was offered a chance to be a part of ITV's punditry team for the 2011 Champions League final between Barcelona and his former club, Manchester United.

Ever since that day, Keane has been part of several punditry teams and is renowned for his astonishing - yet brilliant - rants.

The former midfielder is never afraid to give his honest opinions on the performances of a player or manager.

END_OF_DOCUMENT_TOKEN_TO_BE_REPLACED

However, the ex-Sunderland boss admitted that he had reservations about taking up punditry until he read his morning horoscope.

"I was never that bothered about it," he said.

"When you're playing, you're in the zone and I never took too much notice of what people were saying.

"I kind of just fell into it really when I just left Ipswich. United were in the Champions League final at Wembley and ITV got in touch asking if I would do a game.

END_OF_DOCUMENT_TOKEN_TO_BE_REPLACED

"I was in my house in Ipswich thinking 'will I, won't I?' This is true, I think it was the Monday, a few days before the final, and they wanted an answer quickly.

"I read my horoscope that day and it said 'you can't keep saying no to people' so I said 'I'll do it.' I don't mind just giving my opinion and then going home."

Keane would eventually go on to become a regular on the ITV panel before making his debut on Sky Sports in 2019, where he is regularly seen covering some of the biggest games in the Premier League.