Wayne Rooney's found a bit of form for his new club

Days on from his late, late last-ditch tackle and assist helped D.C. United to a last gasp victory over Orlando City, Rooney found himself amongst the goals again on Wednesday night.

The former Manchester United and Everton striker scored twice in their 4-1 victory at home to the Portland Timbers, the second of which was a stunning free-kick.

Having fallen behind to a Samuel Armenteros opener in the first half, Rooney had equalised before half-time, sliding the ball under the goalkeeper having been played through.

Wayne Rooney vs Portland Timbers
He has completely transformed D.C United, they were rock bottom in the Eastern Conference before his arrival and now they have a genuine chance of making the playoffs pic.twitter.com/zqt2O59v77

With United taking the lead through Oniel Fisher shortly after the interval, England's all-time leading goalscorer curled home his second and their third from 25 yards out with little over 20 minutes still to play. 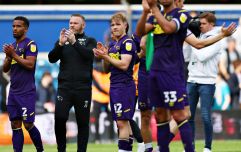 END_OF_DOCUMENT_TOKEN_TO_BE_REPLACED

There was no fight back from the Timbers, who conceded a final goal from Darren Mattocks in stoppage time.

Rooney now has three goals to his name since his move to Major League Soccer was confirmed earlier in the summer.

Although he made a relatively underwhelming start to his career in the US, it now seems his influence on his new team is growing as his fitness levels improve.

Rooney and his teammates return to action next Monday when they welcome New England Revolution to Audi Field.