Wayne Rooney has been confirmed as a D.C. United player. The former England captain has left Everton for a second time, a year after sealing a return to his boyhood club from Manchester United.

The announcement came after a tweet from Rooney which revealed he was on his way to the United States, with reports also claiming he was set to finalise the deal to take him to Major League Soccer imminently.

Advertisement
"It is fantastic to be joining D.C. United at such an exciting time in the club’s history with the new stadium opening in just a few weeks," Rooney said. 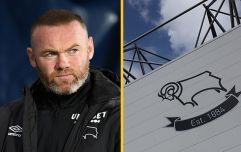 Wayne Rooney has sympathy with Derby staff with administration imminent

END_OF_DOCUMENT_TOKEN_TO_BE_REPLACED

"Moving to America and MLS fulfils another career ambition for me. I have the hunger to be a success here and will give D.C. 100 percent - as I have always done for every team I have ever played for.

"When I visited earlier this summer I was really impressed with everyone I met connected with the club, and of course the new Audi Field. Now I can’t wait to get on the pitch in a United shirt and join my new teammates to bring success to this club."