They have made their intentions clear

Ever since Neymar moved to Paris Saint-Germain last summer, rumours that his move to Paris was merely a pit stop on his journey to Real Madrid have refused to disappear.

Real Madrid have today issued a statement addressing the rumours linking Neymar with a move to the club, in which they state that they have no intention of signing the player. 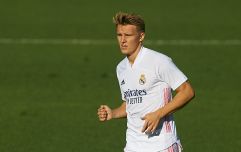 END_OF_DOCUMENT_TOKEN_TO_BE_REPLACED

The statement reads: "In the face of the constant reports linking PSG's Neymar Jr. to our club, Real Madrid C. F. wish to clarify that the club has no intention of making any offer for the player.

The two clubs enjoy an excellent relationship and, as such, if Real Madrid were at any stage to consider securing the services of a PSG player, they would approach the club in the first instance."

Neymar seems set to remain in Paris for another season at least then, with Real Madrid likely to turn their attention towards Eden Hazard as their replacemet for Cristiano Ronaldo, who has moved to Juventus after nine seasons at the Santiago Bernabéu.