Rapid Vienna player scores the goal of the season...ish (Video)

The Austrian had already scored once for Rapid Vienna against Viktoria Plzen, only to see his effort cancelled out by an equaliser midway through the second half.

But just minutes later, the attacking midfielder found himself in a one-on-one situation against the Czech goalkeeper to put his side back in front. 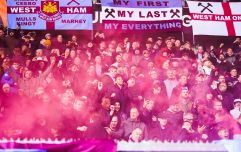 END_OF_DOCUMENT_TOKEN_TO_BE_REPLACED

As he accelerated away from his marker towards the goal, the keeper came out of his goal to narrow down the angle. What was Philipp to do?

Round him with a quick-footed dribble? Nonchalantly chip the ball over of his head? Give him the eyes and slot it into the other corner?

No, with immense skill and invention, the 21-year-old cunningly pretended to fall arse over tit on to the deck, with the ball ricocheting off his shin into the empty net.

popular
Mum in jail for murder pays tribute to son, 6, killed by his dad and new girlfriend
Chilling video shows moment step mum tried to get away with murdering boy, 6
The JOE Friday Pub Quiz: Week 272
Man suing company after being 'hung upside down like meat' at Christmas party
Bride faints on groom, vomits and gets pooed on during ceremony
Petition to stop interviewing Will and Jada Smith has hit 15,000 signatures
Bomb squad rush to A&E after man arrives with WW2 artillery shell up his bum
You may also like
Sport
Napoli president wants to see new lucrative tournament replace Champions League
Sport
UEFA to scrap away goals rule next season
Sport
Alberto Moreno screams ‘you’ll never walk alone’ after Villarreal victory over Man United
Sport
Full Man United playing ratings as De Gea carries can for Solskjaer
Sport
Pogba reveals what United squad said at half time to inspire incredible Roma comeback
Next Page