We love Gary Neville as much as anyone else, but that doesn't mean we'll give him a free pass on everything.

The Sky Sports pundit was on co-commentary duty for the Manchester Derby, which was City's first game since the departure of goalkeeper Joe Hart for Torino.

Hart's replacement Claudio Bravo was making his debut for the club, and had a bit of a nightmare for Zlatan Ibrahimovic's goal for the home side.

The Chilean failed to claim a cross into the box under limited pressure, dropping the ball at the feet of the opposition striker who found the top corner of the net, and he continued to have a shaky afternoon as the game drew on.

But Bravo wasn't the only one who struggled. Neville described the lofted ball in as a "Premier League cross" - did they never play those sorts of balls in La Liga, Gary?

As opposed to other leagues where that doesn't happen

"It's a Premier League cross"

What are you on about Neville? Crosses into the box aren't exclusive to the Prem... 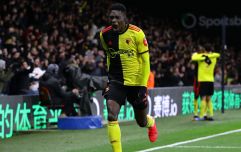 END_OF_DOCUMENT_TOKEN_TO_BE_REPLACED

To be fair, Neville not realising you were allowed to cross the ball in Spain could explain his torrid time in charge of Valencia, where he won just 10 of 28 games and just three of 16 in the league.

It could also explain the form of Manchester City and Spain international winger Jesus Navas, whose crossing is not his strongest suit.

They've all got crossed arms apart from Jesús Navas, who can't cross pic.twitter.com/uuMkqYGbOm