It's been a funny old summer for Paris Saint-Germain

Neymar appeared set to replace Cristiano Ronaldo at Real Madrid. Then it was Kylian Mbappe. And then it was Neymar again. In the end, neither of their two biggest names left for the Bernabeu.

END_OF_DOCUMENT_TOKEN_TO_BE_REPLACED

Equally, there's not been much in the way of high-profile arrivals, either. Gianluigi Buffon postponing his retirement aside, talks of moves for Jerome Boateng, Paul Pogba, Gareth Bale, Christian Eriksen and N'Golo Kante failed to result in any of those players actually signing for the French champions.

One player that has arrived through the PSG doors this summer is Eric Maxim Choupo-Moting, whose move from Stoke City wad confirmed on Friday night.

Having spent a season in England, it's fair to say his five goals for Stoke didn't exactly light up the Premier League - nor were they enough to help the Potters remain in the top flight. 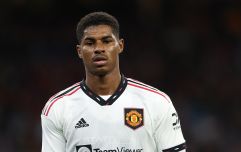 END_OF_DOCUMENT_TOKEN_TO_BE_REPLACED

With this in mind, it's come as something of a surprise that PSG have decided to bring the German-born Cameroonian striker to the Parc Des Princes.

The move is partly explained by the fact the player used to play for recently appointed PSG boss Thomas Tuchel at Mainz, scoring ten goals for them in the 2013/14 season.

Despite this, it's still fair to say that Choupo-Moting linking up with Neymar and Mbappe at PSG has come as something of a surprise to many of those hearing the news.

Thank god for that!! How on earth can PSG want him!!

How has Eric Choupo-Moting gone to PSG from Stoke 🙈

From Stoke to PSG? I need to know what prayer this mans mum been praying https://t.co/B0iSu5nDto