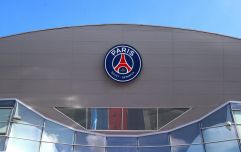 END_OF_DOCUMENT_TOKEN_TO_BE_REPLACED

The 40-year-old's move to PSG was confirmed in a video, which you can see below, today, in a move that had been widely touted for weeks.

It was confirmed that Buffon would leave the Juventus Stadium after their elimination from the Champions League semi-finals by Real Madrid earlier this year, a defeat which followed two Champions League final defeats in three years.

He leaves Juventus - whom he joined from Parma - having represented the Turin side since 2001, making more than 500 appearances and winning 11 titles, two of which were later voided due to the Calciopoli scandal.

His transfer was announced this evening in a video produced by PSG which, in line with current trends, sees Buffon placed in a rather hilarious situation. In this instance it's the goalkeeper placed inside a tailor, before being unveiled wearing PSG's jersey.

This looks … quite different.

Gianluigi Buffon is the newest member of PSGpic.twitter.com/zBm0IgySt6