Fighters wouldn't be blamed for reacting with concern upon discovering that Adalaide Byrd would be scoring their fight.

Byrd remains one of the most controversial figures in all of combat sports and while fight fans have been aware of the judge's unimpressive track record of scoring bouts for years, Byrd's name hit mainstream headlines last September.

Byrd registered a bizarrely lopsided decision for Saul 'Canelo' Alvarez despite the fact that most viewers and pundits had Gennady Golovkin winning comprehensively when the two pound-for-pound greats met in Las Vegas.

The insane scorecards alongside the Compubox stats of #CaneloGGG pic.twitter.com/QVGJ1tGrsy

A furious reaction followed, with viewers simply refusing to accept the split draw outcome of one of the biggest boxing events of 2017 because, without a clear winner, Las Vegas received the guarantee of a lucrative rematch and allegations of nefarious goings-on were levelled at the Nevada State Athletic Commission. 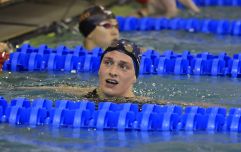 END_OF_DOCUMENT_TOKEN_TO_BE_REPLACED

Byrd has kept a low profile since her contentious scorecard was registered but she returned to judging duties on Saturday night, when she was tasked with working the UFC 222 card.

Commentator Jon Anik made sure to make everyone aware that Byrd would be one of the judges for the undercard match-up between Cody Stamann and Bryan Caraway.

Anik: I can tell you that one of the three judges for this fight is one Adalaide Byrd, first time judging since that controversial decision in GGG vs. 'Canelo' Alvarez so don't shoot the messenger.
Joe Rogan: We both just had a heart attack. Oh God, she was driving a Ferrari after that fight.
Daniel Cormier: Oh my goodness.
Rogan: She's a nice lady though.
Cormier: She's a great lady. The other day I saw her at The Ultimate Fighter gym.
Rogan: She's a very nice person. So is my mom but I wouldn't want her judging any fights.

Byrd was referenced throughout the final round of that bantamweight bout but it wasn't the only fight for which she was responsible.

And with strange scorecards registered following John Dodson vs. Pedro Munhoz and Mackenzie Dern vs. Ashley Yoder, fight fans didn't hesitate to call her out.

you cant tell me its a coincidence that Adelaide Byrd is judging tonight and every single decision has been a split decision. id say "someone get her some new glasses" but i dont think they make any thicker ones. #UFC222

Adelaide Byrd with another horrible scorecard. We have four split decisions in a row now and five is the UFC record. How is she allowed to do this?! #UFC222

Adelaide Byrd scored it for Cody Stamann so I’m totally sure that’s the wrong result.

popular
The JOE Friday Pub Quiz: Week 296
Ricky Gervais finally says what we're all thinking about the Johnny Depp Amber Heard case
Japanese man spends £12,480 to look like a border collie - and it kind of works
Rio Ferdinand and John Terry in Twitter war after controversial 'top 5' pick
Amber Heard's lawyers will not call Johnny Depp back to the stand amid suggestions he is 'uncontrollable as a witness'
Husband of teacher killed in Texas school shooting dies after suffering heart attack
New Time Traveller's Wife series airs 'incestuous' oral sex scene that has left everyone divided
You may also like
Entertainment
Joe Rogan rants about news story that never existed and is mercilessly mocked for it
News
Joe Rogan is convinced Johnny Depp can save Disney's future with this one step
Entertainment
Joe Rogan claims he gained two million subscribers amid attempts to remove his podcast from Spotify
Entertainment
Joe Rogan just threatened to quit his podcast over one thing
Fitness & Health
Health experts forced to advise people 'not to put fish cleaner in mouth, ear, or anus'
Next Page