For what feels like the millionth time, Neymar reportedly wants out of Paris Saint-Germain

The Brazilian only completed his world record switch to the French champions from Barcelona just over a year ago but is now said to be eyeing a move back to the Nou Camp.

A report by Mundo claims Neymar instantly regretted his switch to PSG and isn't motivated by Ligue 1. This aside, it's also been suggested that he has concerns that he's being overshadowed by young teammate, Kylian Mbappe.

Mbappe joined PSG from Monaco weeks after Neymar's arrival. Having helped France to World Cup glory in the summer he's held in high regard across the country, particularly in Paris, the city of his birth. In the wake of him appearing on the cover of TIME magazine last week, the report claims Neymar is concerned the 19-year-old will become the club's biggest star. 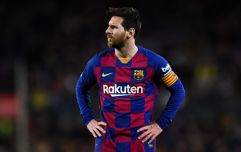 Imagining a world without Lionel Messi at Barcelona

END_OF_DOCUMENT_TOKEN_TO_BE_REPLACED

It also claims that Neymar is simply missing Barcelona - both the club and the city.

While he is said to have retained a good relationship with his former team, he received a lukewarm response when he informed them he would be interested in a return. Although his footballing abilities are admired by those at Nou Camp, the reluctance to re-sign him is said to stem from concerns about the player's advisors - namely his father, who played a key role in forcing his exit to Paris the summer before last.

As well as a move to Barcelona, Neymar has also been linked with a possible transfer to their El Clasico rivals, Real Madrid. The European champions issued an official statement in the summer to deny claims they had approached PSG about a move. Earlier this week, reports in Italy suggested that possible Luka Modric move to Inter Milan hinged on whether Florentino Perez was able to lure either Neymar or Mbappe to the Bernabeu.


popular
The big JOE quiz - guess the emoji footballer
The JOE Friday Pub Quiz: Week 183
The exceptional documentary on George Best is on TV tonight
The JOE Friday Pub Quiz: Week 184
QUIZ: Name the players to have scored the most free-kick goals in the Premier League
PlayStation and Xbox users will now be able to play against each other online
A definitive ranking of every swear word from worst to best

You may also like
Sport
Barcelona and Real Madrid have lost their heads in pursuit of Neymar
Sport
Who is Kubo? The Real Madrid teenager embarrassing his teammates
Sport
In a world containing Messi, Neymar will never find what he's looking for
Sport
Matthijs de Ligt could snub Man Utd and Barcelona for Paris Saint-Germain
Sport
Barcelona senior figure compares Matthijs De Ligt transfer to Man Utd with move to China
Next Page