This time though, it's undeniably the real deal. 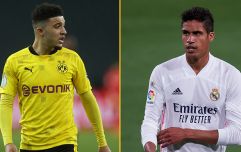 END_OF_DOCUMENT_TOKEN_TO_BE_REPLACED

A video this time - not some low resolution, watermarked image that's been ripped off Twitter somewhere - has now surfaced online showing the shirt being modelled by Juan Mata.

For reasons that will probably become clear when the kit is officially launched, the video features the name of Newton Heath, the club from which United grew - possibly a suggestion that the new strip has been inspired by this part of the club's history in some way (even though it probably hasn't or the link is ridiculously tenuous).

We also see that, as has been rumoured, there's a lot of black on the shirt, including the three adidas stripes on its shoulders. Kohler, United's first ever shirt sleeve sponsor, is also visible.

We don't get to see the shorts yet, which are also said to be black instead of the more traditional white.

The video in full can be seen below, with the official launch thought to be imminent.

United are expected to wear the new shirt for the first time on their preseason tour of the United States. They flew out to the US on Sunday, the second consecutive summer they've visited the country.