In block 48, situated in the upper tier of the North entrance at the NSC Olimpiyskiy, a father pulled his son’s face into his chest, using his shirt as a towel to drain the little boy’s tears

He was no older than 10, with Mohamed Salah’s name on his back, inconsolable as Real Madrid paraded the Champions League trophy - their third in a row - in front of him.

“It’s okay, it’s okay,” the dad said, dabbing his child’s stained cheeks and lifting up his head. “There are two things I want you to remember,” he continued. “The amazing day you’ve had and that Liverpool will be back soon. It’s your first European Cup final experience, but this is not your last.”

There, in the sea of red and white, those words seemed to swirl in the air as a multitude of scarves had done before and after it. The scene had encapsulated the overlapping feelings of disappointment and defiance and the kid composed himself before standing on his chair, puffing out his chest and thundering ‘Liverpool, Liverpool’.

There are those who will argue that reaching a final and not being the victors deletes all that came before it. They will insist rationality is an excuse and context is merely convenient.

They will scratch at Jurgen Klopp and scream that he should be criticised for not sealing any silverware since taking charge on Merseyside. They will preach, with all the conviction in the world, that none of it matters but the trophy lift.


Try telling that to Sean Quinn, who surprised his father Billy in Kiev after three days of travel from Australia, entering and exiting six airports en route. The moment his dad realises he is there, right next to him - the shock morphing into ecstasy before he is engulfed by it all and wells up - will be glued to them forever.

When you surprise your dad in Kiev from Australia✈️ 3 days and 6 airports later, up the fucking reds ???The reaction was worth every penny! we're in Kiev, lets make it six⭐️⭐️⭐️⭐️⭐️? @BillyQLFC pic.twitter.com/LapdIeEIfZ

The winding journeys involving a painful cost and navigating different time zones on trains, buses, delayed flights and Any Means Necessary coupled with the willingness to sleep on floors, on the couches of unknown Ukrainian residents, or nowhere at all will be a tale for the ages.

The surreal happiness that blanketed Shevchenko Park on Saturday afternoon cannot be washed off. Tens of thousands - friends, families, strangers - wearing their support in the most intoxicating way: swaying, bouncing, amplifying their voices, raising their fists, drinking it in as they revelled in The Greatest Time Ever. 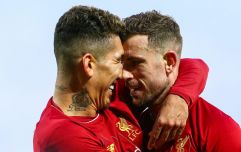 END_OF_DOCUMENT_TOKEN_TO_BE_REPLACED

Red pyro painted the sky, the trees were dressed by banners and the passion had runneth over: at one point as Jamie Webster belted out Allez Allez Allez, there were over 100 people on the small stage in utter delirium - ranging from grandparents to kids, with former footballers dotted in-between. If that experience - as with the spellbinding nights Liverpool have had home and away in Europe this season - is now redundant because of the 3-1 scoreline, is there actually any point in supporting a football club?

If it’s only ever about what the scoreboard reads at the end, why not just cancel all the colour and the process to simply check Twitter for a full-time update?

If the progress of not being a factor in the Champions League since 2009 to navigating a qualifier for the tournament, going on to become its top scorers in the campaign, the vanquishers of favourites Manchester City, and an unexpected finalist is meaningless, why do teams not named Real Madrid even bother?

If unifying a fan base, instilling an assertive, exhilarating identity, moving the club forward in every facet: the displays they can produce, the calibre of player they can attract, earning a back-to-back seat at the continent’s top table, ensuring a collective pull among all departments while implementing long-term improvements is not as important as a trophy, then why would no sane person take Liverpool’s 2011-2012 season over 2017-18? For exactly the same reason none would contest Tottenham are better now than they were in 2007-8.

If Champions League experience is such a vaunted thing - reflected in price tags, stat packs and column inches - then how can everything Liverpool’s players have encountered in the competition from August to May 26 be chucked in the recycle bin?

Against the Spanish giants, Klopp’s side did not stir the soul with fire and attacking fury as they had done in previous rounds. They could not solve Real’s equation of brain in addition to a drip of brilliance. Emotional football was floored by cold, calculating surety. The opponents had been there, done that and got the trophies. They smelt of it. They stunk of it.


Of course, it didn’t help Liverpool that there were too many reduced performances individually, two horrendous goalkeeping mistakes from an absolutely devastated Loris Karius and one debilitating injury - the substitution of Salah on 30 minutes due to a shoulder problem voiding Liverpool of their fear factor, robbing them of a 44-goal phenom and encouraging Marcelo’s front-foot instincts.

END_OF_DOCUMENT_TOKEN_TO_BE_REPLACED

The loss of the Egyptian was a setback too many to scale this season, with the Anfield outfit having already done the unthinkable despite the sale of Philippe Coutinho to Barcelona in January and while fielding injuries to Nathaniel Clyne, Alex Oxlade-Chamberlain, Joe Gomez, Joel Matip, Emre Can and Adam Lallana.

The latter two, shorn of sharpness and rhythm were reinforcements on Saturday night, while Zinedine Zidane could replace playmaker supreme Isco with the matchwinner Gareth Bale. The Welshman’s majestic overhead kick was worthy of deciding a European Cup final a few times over.

The gulf was pronounced following Salah’s departure and Liverpool’s recruitment team, who have aggressive plans this summer including the pursuit of Nabil Fekir and a top-class defensive midfielder, amongst pedigreed others, are aware an injection of quality and depth is essential to advancing.

They have excelled in designing a formidable front line and will look to resculpt the centre of the park. Roma goalkeeper Alisson was identified and assessed earlier this year, but the club iced talks with his representatives in February as a fee of £62 million - and rising - was quoted. It is a position they will have to fortify having left it average and below for far too long.

Ultimately, there will be no standing still. Defiance will overpower disappointment. They will go again, harder and hardened.

And that is why at the final whistle, Liverpool supporters were emboldened to fill the multi-purpose arena with their catchy prose rather than fatalism.

They know it, they’ve seen it, they can feel it. And that matters.

You may also like
Sport
How will Liverpool's new Nike shirts look next season?
Sport
Liverpool winning the league or: how I learned to stop worrying and love the bomb
Sport
Is Sergio Aguero the Premier League's best ever striker?
Sport
Liverpool, Everton and Curtis Jones' confidence
Football
What is 'Everton'? A series of questions, answered
Next Page