Arnautović has been banned for one game

Marko Arnautović faced criticism after his aggressive and allegedly racist celebration following his goal against North Macedonia in Austria's opening Euro 2020 game. However, after calls for the player to be banned for the remainder of the tournament, UEFA has ruled that Arnautović will be banned for just one game. 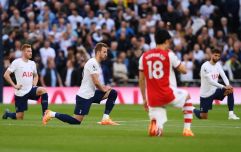 Premier League clubs to stop taking the knee before games

END_OF_DOCUMENT_TOKEN_TO_BE_REPLACED

After the incident, which drew fierce criticism and a complaint from North Macedonia's football association, Arnautovic apologised, but insisted that he is not racist, claiming he has friends in "almost every country" in the world.

“There were some heated words yesterday in the emotions of the game for which I would like to apologise – especially to my friends from North Macedonia and Albania,” Arnautovic said on Instagram. “I would like to say one thing very clearly: I am not a racist. I have friends in almost every country, and I stand for diversity. Everyone who knows me is aware of that.”

The UEFA panel have said that there was no evidence of racial abuse, but they have suspended the Austria forward for the coming match against the Netherlands.