Manchester United fans and Liverpool supporters don't need an excuse to have a row. The Premier League's fiercest (and most silverware laden) rivalry is as fierce off the field as it is on it. With such enigmatic managers as Jose Mourinho and Jurgen Klopp in charge, this coming season promises to be as competitive and intriguing as ever.

END_OF_DOCUMENT_TOKEN_TO_BE_REPLACED

With Paul Pogba on his way to Old Trafford for a world record fee, Mancunians of a red persuasion are understandably ecstatic about landing one of the game's most sought-after players. Just as understandable is the wholesale derision from Anfield way. In fact, not only are they contemptuous of the financial outlay, but they believe they boast have a better player. 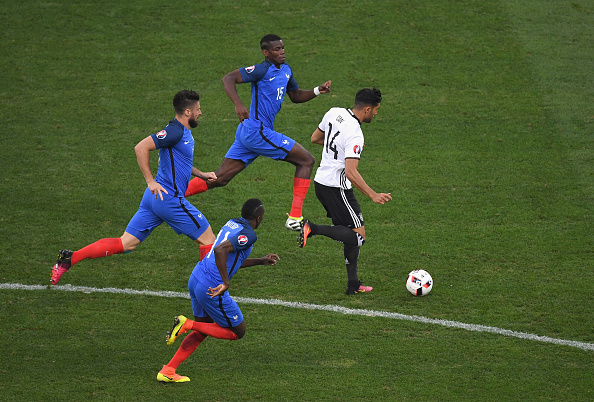 The contention is that Emre Can - who cost just shy of £10m from Bayer Leverkusen - is superior to the £100m man joining Mourinho's cash-fuelled revolution at United. Now this may sound like something of a windup by Scousers looking for a rise from their Manc equivalents, but there does seem to be a feeling that they'd rather have Can in their side than the Juve player.

Not only do they feel that the burly German will dominate Pogba in any individual clash...


Can't wait for Emre Can to dominate Pogba next season 😊

Emre Can will sit on Pogba for the next couple of years anyway, it's calm

...but they argue that the Bayern Munich academy product is a finer footballer too.

Emre Can is a better footballer than Paul Pogba. I am genuinely serious. And he cost us £90m less.. #lfc #mufc


Am I deluded for thinking Emre Can is a better footballer than Paul Pogba?

Are you telling me there is £110M between Emre Can and Pogba? Can is proven in the BPL and his passing is actually better.

As you can imagine, such claims have not gone down very well with United fans, who seem in equal parts very annoyed and heartily amused...

People don't actually think Pogba is better than Emre Can do they?

Emre can being compared to Paul Pogba, what a time to be dead

Here’s hoping Pogba’s deal gets sorted so we can see the two match up.