Leicester City Football Club confirmed on Sunday that its owner Vichai Srivaddhanaprabha has died after the helicopter he was travelling in crashed into the car park of the club's King Power Stadium on Saturday evening.

END_OF_DOCUMENT_TOKEN_TO_BE_REPLACED

In a statement on Twitter, the club said: "It is with the deepest regret and a collective broken heart that we confirm our Chairman, Vichai Srivaddhanaprabha, was among those to have tragically lost their lives on Saturday evening when a helicopter carrying him and four other people crashed outside the King Power Stadium. None of the five people on-board survived.

"The primary thoughts of everyone at the Club are with the Srivaddhanaprabha family and the families of all those on-board at this time of unspeakable loss.

"In Khun Vichai, the world has lost a great man. A man of kindness, of generosity and a man whose life was defined by the love he devoted to his family and those he so successfully led. Leicester City was a family under his leadership. It is as a family that we will grieve his passing and maintain the pursuit of a vision for the Club that is now his legacy."

END_OF_DOCUMENT_TOKEN_TO_BE_REPLACED

The 60-year-old businessman was leaving the stadium after Leicester's 1-1 draw with West Ham via helicopter - as he did after every home game - when it began spinning before falling to the ground.

It has been reported that his daughter was also in the helicopter at the time of the crash, as well as two pilots and an as yet unidentified fifth person.

Srivaddhanaprabha made his fortune after founding King Power Duty Free, and was ranked by Forbes as the seventh richest man in Thailand. 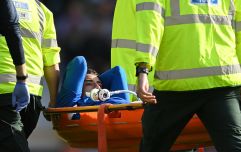 Ben Godfrey stretchered off after sickening injury during Everton vs Chelsea

END_OF_DOCUMENT_TOKEN_TO_BE_REPLACED

He purchased Leicester City in 2010 after a three-year spell in which King Power was the club's principal sponsor.

Srivaddhanaprabha's time as owner and chairman of the Foxes will be remembered as the most successful in the club's history.

A Championship side when he took over, his ownership has seen them become a mainstay in the Premier League and a hugely supported team in his native Thailand, aided by the club's momentous and unexpected triumph in the 2015/16 Premier League title race.

That success, one masterminded by former manager Claudio Ranieri, saw Srivaddhanaprabha become an icon in the city.

Outside of the club's stadium on Sunday, fans told JOE just how much he meant to the supporters, the club and the city itself.

popular
Fans shocked by Tommy Lee's extremely X-rated post on Instagram
Robin Williams' wife shares reason why he killed himself
‘Time traveller from 2090’ warns humans of worst event in history in coming days
Groom shocks wedding by playing video of his bride cheating with her brother-in-law
Runner finishes last in 400m race as penis keeps falling out of shorts
Woman arrested after husband caught her on video allegedly using drain cleaner to poison him
Emergency service workers took photographs of Kobe Bryant’s body 'for a laugh’
You may also like
News
Rainwater is now too toxic for humans to drink and it's our fault, study finds
News
'Crying CEO' slammed for posting emotional selfie after layoffs speaks out
News
Map shows UK covered in yellow as Met Office warns of 'scary' heatwave
News
Jeremy Kyle slammed for calling Nicola Sturgeon that 'horrible woman up north'
News
Fans shocked by Tommy Lee's extremely X-rated post on Instagram
Next Page