He has lit up the Premier League this season

Tottenham Hotspur have continued to light up the Premier League this season, despite playing their home matches at Wembley Stadium and losing Kyle Walker to Manchester City last summer. 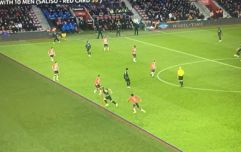 END_OF_DOCUMENT_TOKEN_TO_BE_REPLACED

Spurs talisman Harry Kane and rising star Dele Alli have grabbed most of the headlines for their goalscoring output, as well as being two of England's most talented players, but it hasn't all been down to them.

Son Heung-min has stepped up a level this season, scoring 18 goals in all competitions this season, needing just another four to better last season's tally. His overall play has improved too; he has continuously dazzled opposition full-backs with this pace and dribbling. Son's international teammate Ki Sung-yueng believes Son deserves more plaudits for his form this season and it's hard to argue with his reasoning.

Speaking in Belfast ahead of South Korea's friendly with Northern Ireland, Ki said: "of course his performances of this season have been amazing."

"Everyone knows he is very consistent in every game and he scores many goals for Spurs, which is not easy.

"From last season until now he has shown his quality as a top-class player in the Premier League. I don't say this because he is Asian but I think he must get more credit.

"He has to be in more of the top stories in newspapers. He scores very important goals for Spurs and the consistency is not easy for every player.

"Sometimes you get injured, sometimes you get tired if you play for his kind of team, but he keeps scoring goals and maintaining his performances, even for the national team.