Jermaine Jenas has suggested Leeds United should be hit with a points deduction after manager Marcelo Bielsa admitted sending someone from the club to spy on Derby County's training session on Thursday.

Derby travelled to Elland Road to face the Championship leaders on Friday night, where Bielsa told Sky Sports' cameras prior to kick-off that he was responsible for the incident.

Reacting to his admission, Jenas said on BBC 5live shortly afterwards that he would be "surprised" avoided being hit with a points deduction over the matter.

"If they didn't get a points deduction I'd be surprised," Jenas said. "How else do you lay down a marker making it clear that this kind of behaviour is not acceptable?

"Would a slap on the wrist be enough to make sure that Bielsa doesn't do that?

"I'm more inclined to think that they will lean towards that first."

"If they didn't get a points deduction I'd be surprised." @jjenas8 believes The FA should punish Leeds for #spygate 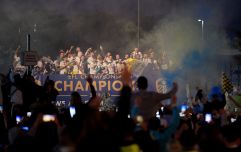 Leeds United's long journey back to the Premier League

END_OF_DOCUMENT_TOKEN_TO_BE_REPLACED

Derby manager Frank Lampard, also speaking ahead of the kick-off, said that the incident shouldn't be excused on cultural grounds.

"If we're going to start talking about 'culturally I did it somewhere else and it was fine', then that doesn't work for me," he said. "I don't believe it is fine on that level."