Jack Wilshere has responded to his omission from England's World Cup squad.

The midfielder was one of the more high profile names to have been left out of Gareth Southgate's 23-man squad, which was announced on Wednesday.

Tweeting the next day, Wilshere made clear that he was(understandably) very disappointed to have been overlooked by Southgate, explaining he felt that he had done enough to merit a call-up after feeling 'fit, sharp and strong' throughout the season.

He closed by adding that he respected the manager's decision and would be supporting the team along with the rest of the nation.

Think its about time I had my say...
It goes without saying that I’m naturally incredibly disappointed to have been left out of the England squad for the World Cup. I’ve felt fit, sharp and strong all season and believe I should be in the squad!

And given the chance i could have made a real inpact.
However, I have to respect the manager’s decision and would like to wish the whole squad all the very best for the tournament. I will always be an England fan and will be supporting the boys with the rest of the nation 🦁🦁🦁 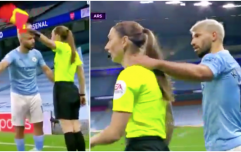 END_OF_DOCUMENT_TOKEN_TO_BE_REPLACED

Wilshere returned to Arsenal this season after spending the 2016/17 campaign on loan at Bournemouth.

The World Cup will be the first major tournament he has missed with England in six years, when he was ruled out of the 2012 European Championships with ankle ligament damage.

His message on Thursday followed his initial, more humorous take on being overlooked which came on his Instagram on Wednesday.