Have we not waited long enough?

A potential Fury vs Joshua showdown this year has yet again been thrown into doubt after Tyson Fury claimed that he is "nowhere near" signing a contract to take on his arch rival. This is despite the updates over the past few months that have seemed to suggest that fight between the two this summer was on the verge of being confirmed. 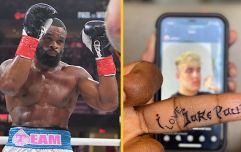 END_OF_DOCUMENT_TOKEN_TO_BE_REPLACED

Speaking to iFL TV, Fury said: "There's a lot going on behind the scenes that can scupper a fight."

"Nothing's actually on until you're in the ring, we're nowhere near that at the moment… Do I think the fight will eventually happen? Yes. Do I think it's imminent? No."

The self-proclaimed 'Gypsy King' also suggested that a third fight with Deontay Wilder was a possibility.

Tyson Fury: "Don't write Deontay Wilder off out the equation, he could be fighting me next, who knows? I could have a trilogy with Wilder yet. There's a lot of stuff going on behind the scenes and Wilder might be next, who knows?" [@IFLTV] pic.twitter.com/YiP3NtLIQ3

The comments will be disappointing for boxing fans to hear, as a clash between the two titans of the heavyweight division had seemed an inevitability after AJ defeated Kubrat Pulev last December to retain his belts.

However as is usually the case with Fury, his comments should be taken with a very large dollop of salt. They are in fact in stark contrast to the words of his promoter.

END_OF_DOCUMENT_TOKEN_TO_BE_REPLACED

Frank Warren told talkSPORT: "We've all agreed to announce any news simultaneously, so I can’t break a confidence I’ve agreed to. But what I can say is that everything is agreed, it’s an imminent announcement and we’ve got to work on a site, and that’s it."

Warren did admit though that Fury was getting frustrated with the delay.

"Nobody is more frustrated than the fighters and us, we've worked like you cannot believe to get this over the line," Warren said.

"I think Tyson is a bit peed off about it because it’s dragging on and on and on."

So watch this space people. Despite what Tyson has said, an announcement on what would be the biggest fight in British boxing history might come sooner than we think.