Atletico Madrid turned down the chance to sign Ronaldo

Cristiano Ronaldo was reportedly offered to Atletico Madrid before making a sensational return to Manchester United this summer. 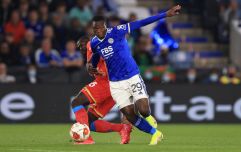 END_OF_DOCUMENT_TOKEN_TO_BE_REPLACED

The Portuguese captain has enjoyed an impressive start to his second spell at Old Trafford, scoring four goals in three games for Ole Gunnar Solskjaer's side.

However, things could've been very different for both United and Ronaldo with reports in Spain suggesting that Atletico Madrid were given the chance to sign him by the 36-year-old's super agent, Jorge Mendes.

Carrusel Deportivo, via Sport, have reported that Atletico were contacted about the possibility of a deal in August, after Ronaldo's representative - who conducts business with the current La Liga champions on a consistent basis - was seemingly keen to move forward with constructing a deal.

However, considering the fact that Juventus were initially reluctant to let Ronaldo leave Turin, and that Atletico would've most likely been unable to match the forward's wage demands, negations would have proved difficult.

Not only would it have been finacially difficult to secure a move for the leading international goalscorer, but the report also suggests that the 'Colchoneros' hierarchy were concerned about the potential backlash from their supporters given Ronaldo's history with Real Madrid.

END_OF_DOCUMENT_TOKEN_TO_BE_REPLACED

Therefore, after being informed that negotiations would have to commence before August 15, Atletico decided against pursuing a deal, with manager Diego Simeone instead focusing on securing a return for Antoine Griezmann.

Simeone evidently got what he wanted as the Frenchman did indeed make his return to the Wanda Metropolitano, which was made possible after midfielder Saul Niguez joined Chelsea.

With Atletico out of the picture, and Ronaldo officially confirming that he wanted to leave Juventus, a late battle to secure his signature between Manchester United and Manchester City had seemingly begun.

It initially looked as though the Portuguese star would be making the controversial move to City, before they removed themselves from contention, stating that they were never serious about signing him.

This therefore allowed Ronaldo to secure a sensational return to Old Trafford, 12 years after leaving the club to join Real Madrid.

popular
Watford staff unhappy with Ben Foster's commitment to vlogging on club time
Everton footballer has bail extended until January
Mum who drove into Insulate Britain in rage says 'I just gave them a nudge'
Nigel Farage says another IRA slogan in latest Cameo trick
Passengers who allegedly filmed rape of woman on train unlikely to be charged
QUIZ: Name all 50 of these 2000s Champions League players – #4
Gordon Ramsay's daughter Tilly calls out radio host for 'fat shaming' her live on air
You may also like
Sport
Family of the Newcastle supporter who collapsed issue statement on his condition
Sport
Atalanta players woken up six times by fire alarm ahead of Man Utd clash
Sport
Newcastle ask fans to stop wearing wearing Arabic clothing and Middle East-inspired head coverings
Sport
Allan Saint-Maximin thanks 'gentle' Steve Bruce in heartfelt tweet after sacking
Sport
Steve Bruce admits it was hard to be called a 'tactically inept cabbage head'
Next Page