Champions League football appears to be coming to Fifa 19.

Although many jumped to this conclusion when it was announced Konami - publishers of Pro Evolution Soccer - would be ending its partnership with the competition last month, the news now appears to have been accidentally confirmed by one of the game's commentators. 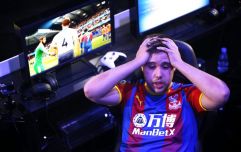 END_OF_DOCUMENT_TOKEN_TO_BE_REPLACED

Evert ten Napel is a commentator on the Dutch Eredivisie for Fox Sports but also lends his voice to some editions of Fifa. In an interview with Dutch television, he discussed the process of providing commentary for the game. While doing so, he let slip that Fifa 19 would indeed include the Champions League.

"For about six or seven days a year, I record updated lines in the studio in Utrecht with Youri Mulder," he explained.

"In 2019 the game will get even better, because they've added the Uefa Champions League and Uefa Europa League.

"I'm almost finished with the 2019 version, which will then go to the test centre, some very good players will check everything and after that, it will go to the stores in October and then all those weirdos will be standing in line again at midnight."

Looks like the cat is out of the bag then...

Official confirmation of the Champions League's Fifa return appears imminent, with some speculating it could arrive as part of next month's E3 in Los Angeles.