On Wednesday, Celtic manager Brendan Rodgers revealed that Griffiths has agreed to take some time out in order to deal with some personal issues that have become a concern for him in recent months.

END_OF_DOCUMENT_TOKEN_TO_BE_REPLACED

Rodgers did not elaborate on Griffiths' problems but he did throw his support behind his striker, who has been one of the club's most reliable goalscorers since his 2013 move to Parkhead.

"Leigh will be out of football for a little period of time," Rodgers said. "He's had ongoing issues for a number of months. He's reached a point where it's a struggle for him.

"We are going to give him all the professional help he needs to get him back in a good place.

"He's a great guy but football and life is tough for him right now. We want to help him with that and we'll let you know when he's back. I'm very close with him.

"We have a strong relationship but he's had number of issues outside of football.

"The most important thing for managers and coaches is the welfare of players. It's no longer a weakness to talk now. He has all of our support - the team, the staff and the supporters."

In the first game since Griffiths' issues were made public, Celtic supporters made it known that they stand with the Scottish forward as they unfurled the below banner ahead of Thursday's Europa League clash with Salzburg.

Griffiths sent a message of thanks to all his supporters while vowing to come back as a stronger person. 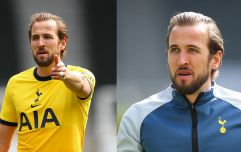 END_OF_DOCUMENT_TOKEN_TO_BE_REPLACED

"I thank you all sincerely and want to let you know I’m doing all I can to come back as soon as possible, a better and stronger person," Griffiths said.

"I thank you all sincerely and want to let you know I’m doing all I can to come back as soon as possible, a better and stronger person."