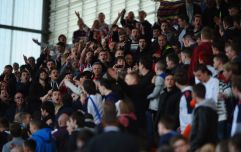 END_OF_DOCUMENT_TOKEN_TO_BE_REPLACED

That's how long Saido Berahino had gone since his last goal - West Brom's third in a 3-2 win over Crystal Palace in February 2016.

But on Tuesday night, the 25-year-old finally ended his goal drought, bringing to an end a run of 48 matches without finding the back of the net.

Now with Stoke, the club he left West Brom for in January 2017, Berahino headed home the opening goal of the night as the Potters hosted Huddersfield Town in the Carabao Cup.

It's fair to say the goal had an element of luck to it: James McClean's shot rebounding off the frame of the goal and on to the striker's head. His header looped up into the air, and just about crossed the line before a defender could intervene...

Not that Berahino will mind too much. This one has been a long, long time coming.

popular
Lisa Kudrow hits back at fans complaining about lack of diversity in Friends
James May 'hospitalised after crashing into wall at 75mph filming new show'
Landlord faces £40k fine after tenant puts swimming pool on roof of flats
Ex-teacher who got pregnant by former student plans to film birth so it can be taught in schools
The JOE Friday Pub Quiz: Week 307
Robin Williams' wife shares reason why he killed himself
Furious Reading and Leeds ticketholders demand refunds as band replaces Rage Against The Machine
You may also like
News
West Brom fan who racially abused Romaine Sawyers sentenced to eight weeks in prison
Sport
Tony Pulis was "like he'd won lottery five times" when he discovered Rory Delap's throw
Sport
James McClean shares image of threats sent to him on Instagram
Sport
His time at Barca is over, now it's time for Messi to do the noble thing
Sport
In tribute to Peter Crouch, a daddy long legs in ballet shoes
Next Page