The Australian government have cancelled tennis star Novak Djokovic's visa for a second time, leaving him no recourse other than to mount a legal challenge against the decision. 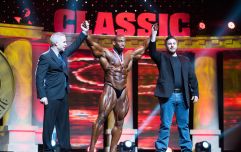 END_OF_DOCUMENT_TOKEN_TO_BE_REPLACED

The 34-year-old Serbian now faces deportation from the country, meaning he wouldn't be able to defend his Grand Slam title at the Australian Open.

The decision was made by Immigration Minister Alex Hawke, and could also mean Djokovic faces a three year ban on obtaining an Australian visa.

"Today I exercised my power... to cancel the visa held by Mr Novak Djokovic on health and good order grounds, on the basis that it was in the public interest to do so," the minister said in a statement.

popular
Bette Midler wants the US to ban Viagra because it’s ‘God’s will’ to have a ‘limp d**k’
Travis Barker’s daughter shares picture of Blink-182 star in hospital bed - tells fans to ‘send your prayers’
Police hunt for two 'laughing' men who kissed three-year-old girl in front of distressed mum
British teen says she was raped in Majorca hotel by 'famous actor and musician'
Father takes his own life after 18-month-old found dead in hot car
Halifax has introduced staff pronoun badges and its customers are not happy
'You're disgusting': Prince William roars at photographer who was 'stalking' his family
You may also like
News
Covid infections rise by almost half a million in a week amid warnings it has not 'gone away'
News
Prince Andrew is now banned from public return at ancient ceremony after missing Jubilee 'due to covid'
News
'New covid wave is now starting' Sage scientist warns as infections spike for first time in two months
News
Elon Musk says staff can ‘pretend to work somewhere else’ after controversial leaked emails
Life
Spain to welcome back unvaccinated Brits 'within days' just in time for the summer holidays
Next Page