For the majority of the summer, Real Madrid striker Alvaro Morata has been strongly linked with a move away from the club.

While Morata has made no secret of his desire to play in England, eagle-eyed social media users noticed last night that his wife, Alice Campello, had partaken in some unusual activity.

The pair's recent marriage left many fans under the impression that any transfer talks were on hold. However, Campello's decision to follow NASA on Instagram has got stargazers the world over excited about the prospect of the former Juventus man moving to the moon.

Campello began following the National Aeronautics and Space Administration yesterday evening, and has reportedly "liked" a number of the organisation's posts about the astronomical body that orbits our planet, as well as dozens more about prospective future launches.


While it will no doubt come as a disappointment to some Manchester United fans, those close to Morata say that his interest in the universe - and the moon in particular - dates back to his infancy, when his mother and father installed glow in the dark star and planet stickers on the ceiling of his bedroom. 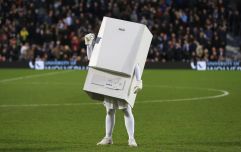 Who would win a fight between all the football mascots?

END_OF_DOCUMENT_TOKEN_TO_BE_REPLACED

Sources say that while a deal is far from done, Morata will struggle to turn any such move down.

"Alvaro loves to play football and has enjoyed his time at Madrid, and his spell at Juventus prior to that. However, his true love is the stars above us," said a friend of his family today. "Since he was a little boy he has been reading books about the moon landing and the make-up of our universe and possible worlds beyond. This is the type of move he dreamed about but never truly believed would happen. As such, it will be impossible for him to reject."

The move has been widely welcomed by the astronomical community, with many suggesting that a high-profile name such as his is exactly what is needed at a time of low public interest.

Manchester United fans however have been less kind, with the vast majority either claiming that they never wanted him or calling him a "lunar nonce".


popular
THE JOE FRIDAY PUB QUIZ: WEEK 174
QUIZ: Which footballer has the higher FIFA rating?
This is how much time most men need after orgasm before they're ready for another round
Leaked audio from Meghan Markle's Duchess lessons has emerged
Liverpool winning the league or: how I learned to stop worrying and love the bomb
A definitive ranking of every swear word from worst to best
Tickets for UFC London are about to go on sale