A viral video currently circulating on social media shows a daughter informing her father that she shelled out €70 (£60) for "premium air" to be pumped into her car tyres.

TikTok user Kerri Mitchell (@kerrimitchellxo) pranked her father through WhatsApp voice notes. The ensuing hilarity has since garnered over 1.5m views and thousands of likes.

After telling her father, his response is nothing if not brutally honest.

"€70 to get air in your tyres? There's something wrong with you?" he asks.

"Are you f***ing simple?" he continues, his angry Irish accent only adding to the animation of the situation.

END_OF_DOCUMENT_TOKEN_TO_BE_REPLACED

The father doesn't let up, continuing to berate his daughter most hilariously.

"You sound like you've air in your bleedin' head. Hope you're not on the joints or you'll be getting slapped the next time I see you."

Kerri confirmed she was not "on the joints" as her father put it.

"€70, are you winding me up? €70 to get someone to put air in your tyres, there's seriously something wrong with you.

"Seriously lacking a few f***ing air cells in your brain." 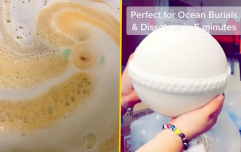 END_OF_DOCUMENT_TOKEN_TO_BE_REPLACED

Any guesses what the father's favourite word is?

Then, dad positively lost it after telling him that it was actually "premium air" they put in her tyres.

"Premium air? Are you f***ing simple? Premium air, what f***ing sort. Listen, there's only one kind of air, that's the f***ing air that you breathe."

We checked the science, turns out premium air isn't a thing after all.

"Air is air, it pumps up a tyre. I hope you didn't give someone 70 quid. In fact, actually, what garage did you go to to get the air in?"