Kim Jong-un is protecting that drip

North Korea is banning its citizens from wearing leather trench coats as their Supreme Leader Kim Jong-un is the only one who can fully rock the Matrix look.

According to Radio Free Asia, there has been a complete ban on men wearing leather trench coats, with state police confiscating the clothing from both citizens and salespeople.

Sources tell the radio station that the new rules were implemented after people began copying their leader's style directly.

"During the military parade at the 8th Party Congress in January of this year, the Highest Dignity and all the high-ranking officials were shown wearing leather coats also," the source told Radio Free Asia. 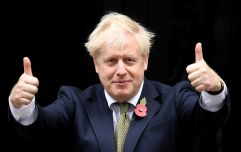 END_OF_DOCUMENT_TOKEN_TO_BE_REPLACED

However things didn't stop there - as Kim's sister, Kim Yo Jong, was also clad in a leather jacket similar to her brothers. As such, women also began emulating the style.

"Leather coats began to be recognized as a symbol of power," the source said.

"Young men protest, saying they bought the coats with their own money and there is no reason to take them away.

Lmao he said when the winter come I be dressing https://t.co/0vOTAUIv0X 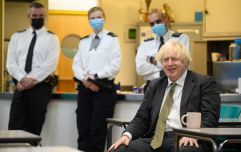 END_OF_DOCUMENT_TOKEN_TO_BE_REPLACED

"They instructed the public not to wear leather coats, because it is part of the party's directive to decide who can wear them."

Although another source negates the claim that the Supreme Leader is a fashion icon and instead suggests that the coats have been popular for some time. They say that South Korean actor Jang Dong-gun actually popularised the coat in the early 2000s.

"That was when South Korean films began to spread in provincial cities, and the leather jacket worn by the South Korean actor Jang Dong-gun became all the rage and is still in vogue," said the second source.

"Rich entrepreneurs are able to import the fabric for the coats by placing an order with state-run trading companies who have partially resumed maritime smuggling."

The west may have Kim K but the east is rocking it with Kim Jong-un and his signature leather coat.

popular
Dr. Dre shares unbelievable video of Eminem's skills to prove no rapper could beat him
'He completely satisfies me' - wife of disabled man hits back at trolls mocking sex life
Man tracked down and killed son's paedophile abuser live on TV
'Hey kiddo! This is your uncle ' - creepy moment OnlyFans star's relative finds her page
A definitive ranking of every swear word from worst to best
Former army sergeant who became porn star explains why she made career move
Elon Musk offers kid $5k to take down Twitter account tracking his plane
You may also like
Fashion
Megan Fox and Machine Gun Kelly have chained themselves together by their nails
Entertainment
Asda shoppers can buy Gucci clothes from just £12 today
Sport
Dominic Calvert-Lewin annoys all the right people with magazine cover
Entertainment
Keanu Reeves gifts $10k Rolex watches as a thank you to John Wick 4 stuntmen
Life
Woman almost dies after high-cut jeans give her a wedgie
Next Page