Kim cracks down on foreign influence.

The North Korean state-run media has instructed young people to use North Korea's standard language and refrain from using southern slang. The BBC also reports that the Korean media also warned against its youth copying the fashions, hairstyles and music of South Korea. 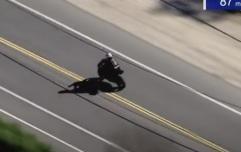 END_OF_DOCUMENT_TOKEN_TO_BE_REPLACED

North Korea is famously stringent, controlling, and increasingly demanding of its people. A new motion to scrub out international influence has also caused North Korea's supreme leader to look at its neighbouring southern country.

"The ideological and cultural penetration under the colourful coloured signboard of the bourgeoisie is even more dangerous than enemies who are taking guns," the article read.

Supreme Leader Kim Jong-Un recently called K-Pop a "vicious cancer" and that anyone caught with large amounts of media from South Korea, the US, or Japan could face the death sentence. Moreso, if you are caught watching foreign media, you can now be sent to a prison camp for fifteen years.
Kim is "is well aware that K-pop or Western culture could easily permeate into the younger generation and have a negative impact on its socialist system," says Professor Yang Moo-jin.

"He knows that these cultural aspects could impose a burden on the system. So by stamping them out, Kim is trying to prevent further troubles in the future."

However, despite Kim's best efforts, the Korean black market, or Jangmadang, is adept at smuggling in outside influences. The Korean Herald reports that some generations are used to "watching South Korean drama series and listening to K-pop smuggled in on flash drives from China."

"The glitzy TV dramas gave them a glimpse of life south of the border, convincing them the North was not the socialist paradise they had been taught to believe it was. Some defectors who have settled in South Korea have said it was South Korean dramas that motivated them to risk their lives by crossing one of the world’s most heavily fortified borders."