Hell is empty and all its cabinet members are here

Michael Gove? Ed Balls? Two words come immediately to my mind. Cool dudes. Or, cool motherfucking dudes. And no, that's not because Gove says that JOE.co.uk is his favourite website. It is in fact because the pair really rock a Gangnam Style.

Strictly fans will know that this is not the first time Balls has paid homage to the author of YouTube's onetime most viewed video. 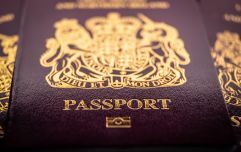 END_OF_DOCUMENT_TOKEN_TO_BE_REPLACED

He loves a Gangnam does Ed, bloody loves it. So it should not be surprising he was filmed pulling out the move with JOE's number one fan Michael at, what I assume, is some think tank's Christmas party and not a preview of our Boschian post-Brexit cultural hellscape.

Thinking on it, I'd actually like to go back to 2012. Tory ideological austerity not quite yet crippling the country's public services. The spectre of UKIP looming but not quite realised. The world not ending on December 21.

So here we are, this is probably far enough in to show you the video.

Stop. What. You. Are. Doing. pic.twitter.com/6yaM1IeKx6

Maybe the Mayans were only six years out.

popular
Incredible case of the only known individual whose parents were two different species
Pop Idol star Darius Danesh found dead aged 41
TikTokers are utterly convinced there is a secret zombie apocalypse going on in China right now
Darius Danesh opened up about his health struggles before his tragic death aged 41
Jamie Foxx and Snoop Dogg's vampire movie surges to the top of Netflix charts
Darius Danesh pictured with Gerard Butler before his death
People are sharing 'evidence' that history's biggest event was staged by humans
You may also like
News
Sympathy in short supply as Michael Gove gets stuck in airport chaos for 30 hours
Politics
Someone has just set pictures of glum-looking Cabinet ministers to the Succession theme tune
News
Michael Gove: Bizarre interview shows he only cares about himself, body language expert says
News
Brits who welcome Ukrainian refugees into their homes will receive large monthly payment
News
Michael Gove mistakingly says 300,000 visas given to Ukrainians
Next Page