Man of the people.

In American politics, there's an adage that people are more willing to vote for the candidate that they're more likely to have a beer with. Well, Jeremy Corbyn didn't win an outright majority during the general election, but there's no denying that the Labour leader has a more human touch than Theresa May. 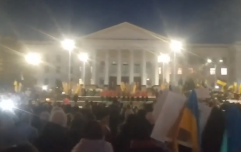 END_OF_DOCUMENT_TOKEN_TO_BE_REPLACED

Corbyn's ability to engage and converse with the public has seen his political stock skyrocket in the last few months, but it appears that he's not even relaxing during his trip to Glastonbury.

Granted, we know that Corbyn loves some grime and indie rock, but the Labour leader will actually be addressing the public on the Pyramid Stage from 4pm.

Before that speech, he was more than happy to pull pints from behind the bar while working for the Workers Beer Company.

It's refreshing to see a politician that's prepared to get his elbows - and presumably his ankles - dirty while serving the public. We wonder if he would give us a lock-in?

We'll drink to that!

At the Solstice Bar at #Glastonbury. Looking forward to my 4pm speech at the Pyramid Stage. pic.twitter.com/DPnvPvLYrp