Home Secretary Sajid Javid apparently refers to himself as “The Sajid”

What do Home Secretary Sajid Javid and Dwayne Johnson have in common?

No, they are not both former WWE Champions, or both stars on the Fast & Furious franchise. Only Johnson has done those things.

It turns out that Javid, just like The Rock, likes to refer to himself in the third person in public.

According to a report in The Sun, rival Conservative ministers say that the Home Secretary goes around calling himself "The Sajid".

People who speak in the third person about themselves:

- Gollum from Lord of the Rings
- The Rock
- Mr Miyagi from the Karate Kid
- Francesco Bernoulli from Cars 2
- The Zodiac Killer
- Elmo
- The Home Secretary pic.twitter.com/gVBujUbGP9 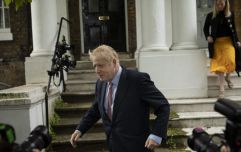 Can the public name any of the Tory leadership candidates?

END_OF_DOCUMENT_TOKEN_TO_BE_REPLACED

A cabinet source told the newspaper: "He uses phrases like, 'Just you watch what The Sajid is going to do about this', or 'The Saj will sort that out'. It’s bizarre. I think he’s losing the plot".

Javid has been one of the top contenders to replace Theresa May as leader of the Conservative Party.

This week, he requested the Royal Navy be sent to the English Channel to tackle migrant crossings.


popular
Nando's is coming back this week
Piers Morgan calls out Dominic Cummings for eyesight claims in press conference
QUIZ: Can you guess the Leonardo DiCaprio movie from a single image?
QUIZ: Who said it - Prince Philip or Michael Scott?
The JOE Friday Pub Quiz: Week 192
The hardest brand logo quiz you'll ever take
QUIZ: Can you remember these minor characters from Friends?

You may also like
News
Shamima Begum lawyer slams Sajid Javid over treatment of teen
News
Bangladesh says it will pursue the death penalty for Shamima Begum
Comment
You do not need to carry a knife, there is help, there is a life without violence
News
Theresa May denies there is any link between rise in knife crime and austerity
News
Sajid Javid demands end to 'senseless' knife crime as two teenagers are killed in 24 hours
Next Page