Lineker sat down ahead of the release of his book

Gary Lineker has spoken about the culture of blame and pile-ons on social media platform Twitter in an exclusive interview with JOE. 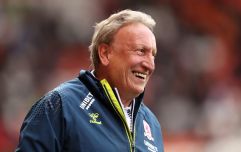 END_OF_DOCUMENT_TOKEN_TO_BE_REPLACED

Speaking ahead of the release of his new book, Behind Closed Doors: Life, Laughs and Football, co-written with his fellow podcast host Danny Baker, Lineker discussed the recent incident of BBC politics editor Laura Kuenssberg facing criticism after she sent a tweet identifying a man who had confronted Boris Johnson about Tory cuts to the NHS in a clip that went viral on social media.

“If you’re in the news world at the BBC, you have my sympathy.”@GaryLineker says @bbclaurak has been the victim of a Twitter pile on just for doing her job. pic.twitter.com/g3K5A2Crol

Lineker expressed sympathy with Kuenssberg and all of her colleagues working on news and current affairs for the state broadcaster, acknowledging that whatever they say, half the country are likely to be annoyed.

END_OF_DOCUMENT_TOKEN_TO_BE_REPLACED

He also discussed Brexit, the ramifications it will likely have on Britain and the inherent illegalities of the Leave campaign which have resulted in him becoming a proponent for a People's Vote.

He also revealed that he does expect Brexit to potentially have one positive impact: on the number of young English footballers being given a chance in the Premier League.

"Nobody really knew the ramifications of Brexit at that point, and also the obvious illegalities as well."@GaryLineker on Brexit, advocating a People's Vote and the one positive that might come out of leaving the EU. pic.twitter.com/b9CwROgUfX

Behind Closed Doors: Life, Laughs and Football, by Gary Lineker and Danny Baker, is available now

popular
Incredible case of the only known individual whose parents were two different species
Multiple fatalities after planes collide mid-air over airport
Andrew Tate banned from Instagram and Facebook
Court hears cringeworthy poems Ryan Giggs wrote to his ex
Former Playboy Bunnies detail what it was like having unprotected orgies with Hugh Hefner
Rishi Sunak names his usual Maccies order - but it was withdrawn more than 2 years ago
The JOE Friday Pub Quiz: Week 308
You may also like
Sport
Erik ten Hag 'now fully understands' why he was warned about Man United job
Sport
Kylian Mbappé wants to 'dismantle Argentine Republic' at PSG
Sport
Carlo Ancelotti confirms Casemiro will join Man United
Sport
Gary Neville tells Glazers it would be 'unacceptable' to part sell Man United
Sport
Gary Neville reveals he collapsed during England Euro 2020 win against Germany
Next Page