Robbie Williams will be one of the artists to perform in Sunday's One Love Manchester, a concert being held to raise money for those injured or bereaved by the Manchester Arena bombing last month.

Performing at the Etihad Stadium on Friday evening, he changed the words of one of his songs to pay tribute to the city following the shocking terrorist attack.

Opening his show, Williams told the crowd: "We are Manchester and we are not f**king scared" before later altering the lyrics in the chorus of Strong, as seen in the video below.

The lyrics also appeared on a big screen, encouraging those in the audience to join in. 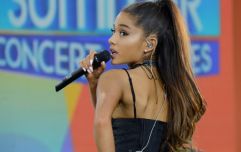 END_OF_DOCUMENT_TOKEN_TO_BE_REPLACED

Later in the performance, Williams dedicated his song Angels to the 22 people that died in the attack.

Williams will perform another open air concert at the Etihad on Saturday evening before reuniting with his former Take That band mates as part of Sunday's One Love Manchester concert.

Ariana Grande, the American singer whose concert was targeted by the bombing, will also feature at the event having returned to the city earlier in the week. On Friday night, images were released of her visiting some of the children that were hospitalised by the attack.