It's being reported that he died moments after.

Slobodan Praljak, a wartime commander of Bosnian Croat forces, has died by suicide, as reported by AP. Moments after the UN appeals judges upheld his 20-year sentence for war crimes against Bosnian Muslims, Mr Praljak openly said in court that he “drank poison."

The 72-year-old tilted his head back and ingested the poison from a flask or glass as the judge read out the verdict.

“I just drank poison. I am not a war criminal. I oppose this conviction," he said.

The moment a war criminal 'takes poison' in courthttps://t.co/AzZTNY6Amv pic.twitter.com/iGsbXUM9LX 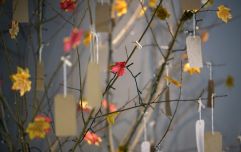 END_OF_DOCUMENT_TOKEN_TO_BE_REPLACED

At present, the Associated Press has reported the following: "Croatia’s state TV says Slobodan Praljak who claimed to have taken poison just after his 20-year sentence was upheld by appeals judges at a U.N. war crimes tribunal, has died.Dutch police will not comment on the TV report based on 'sources close' to Gen. Praljak."

After realising that Mr. Praljak had ingested poison, the presiding judge called for a doctor and suspended the proceedings.