With the capital under Taliban control, was the west's Afganistan campaign for nothing?

When troops were pulled from Afganistan last month, bringing a thirteen-year campaign to a close, criticism arose around the idea that it was all for nothing given rising tensions. As the Taliban swept across the country, the west looked on. Now, a month later, the capital of Kabul has fallen. Amongst criticisms are the voices of soldiers who sacrificed so much for the campaign.

Firing at the Kabul airport. Taliban are barely 100 meters away and stopping people from entering the airport. Hundreds of people are sitting at the runway refusing to leave in the hope of flying out of the hell. (Video+Info) via local sources pic.twitter.com/iPt5N6ilx3

Jack Cummings, a veteran who lost both his legs in 2010 in Afghanistan, tweeted:

"Was it worth it, probably not. Did I lose my legs for nothing, looks like it. Did my mates die in vain. Yep."

Was it worth it, probably not. Did I lose my legs for nothing, looks like it. Did my mates die in vain. Yep. On my 11th Bangaversary it’s a very somber one. Many emotions going through my head, anger, betrayal sadness to name a few…. pic.twitter.com/xNkjZ9qqe6

The families of British soldiers who died during the Afghan operation have responded to the news. "It's devastating to see what's being going on in Afghanistan over the past few days," said Sarah Adams, whose son died aged 21 when his Warrior armoured vehicle was blown up. 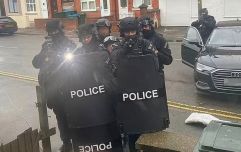 END_OF_DOCUMENT_TOKEN_TO_BE_REPLACED

"Everything he worked towards will soon be torn apart. It's heartbreaking to see what's happening, not just for the families who lost sons and husbands, but for those who served and still carry the physical and mental injuries. Now it feels as if none of it was worth it."

US intelligence predicted that the Taliban would control Afganistan within six to twelve months, but this estimate was later revisioned to three months.

Major General Charlie Herbert, who lost many troops in the conflict, said the 'bravery and bloodshed' of servicemen and women had been 'turned to dust in just a few short days'.

"'How shameful. How unforgivable. I barely have the words to describe how enraged I am."

"I am sickened by the prospect of the 20th anniversary being marked by the Taliban back in control of Afghanistan," said former defence secretary Lord Robertson, who was Nato secretary-general on 9/11.