Still, the one that was announced shortly after polling stations closed on Thursday evening didn't make pleasant reading for the Conservatives. 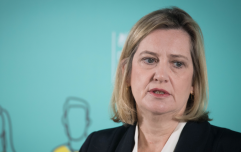 END_OF_DOCUMENT_TOKEN_TO_BE_REPLACED

Pointing towards a hung parliament, the exit poll suggested the Tories would  fall 12 seats short of the 326 needed for an  absolute majority in the House of Commons. Labour were on 266, followed by the Scottish National Party on 34 and Liberal Democrats on 14. Plaid Cymru had three with the Green Party put on one.

According to the BBC, the exit poll also suggested that Home Secretary Amber Rudd, who was recently sent by Theresa May to represent her party at the televised leaders' debate,  was in danger of losing her Hastings and Rye seat.

Predictably, Twitter had plenty to say on the matter...

If Amber Rudd loses her seat, she should send Theresa May out in her place to hear the results. It’s only fair. #ElectionDay2017

This gets better and better...Amber Rudd might lose her seat.#GeneralElection17 #ExitPoll

The Amber Rudd Shame on you campaign seems to have had an effect in #HastingsandRye#GE2017 pic.twitter.com/rX6GXH3JV7

It will be very funny if Amber Rudd, one of the few Tories to come out of the election with their reputation enhanced, were to lose her seat https://t.co/fQJ0OjYp5W

As we say, exit polls are merely a forecast. Let's just wait and see what the morning brings.

popular
Prince Andrew 'flew with sex slave' who was 'frozen with fear', court told
Harrowing video shows teen blasted in the face with shotgun - and survive
Elon Musk shares 'evidence' we are actually living in a simulation
Actor in Oscar-nominated film dies aged 22 after shooting
QUIZ: Who plays here? Match the clubs to these 50 stadiums
Boy, 11, who doesn't speak good English missing after going to play football
Scotland international rugby star Siobhan Cattigan dies aged 26
You may also like
IWD 19
Amber Rudd reads the vile abuse she receives on a daily basis
Politics
Tory immigration minister merked in select committee over treatment of asylum seekers
Politics
David Lammy compares himself to Omar from The Wire after Rudd resignation
Politics
Sajid Javid has replaced Amber Rudd as home secretary
Politics
Everyone is making the same joke about Amber Rudd's resignation
Next Page