Barely 24 hours after Gianni Infantino was caught up in football's corruption scandal, Uefa's offices has been raided by Swiss police.

Infantino is believed to have signed off on a contract with two businessmen, who have since been accused of bribery, the documents reveal. 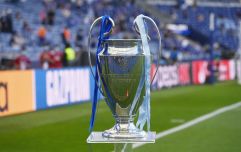 END_OF_DOCUMENT_TOKEN_TO_BE_REPLACED

Father and son Hugo and Mariano Jinkis bought TV rights for Champions League football matches, only to immediately sell them on at a price of almost three times the amount they acquired them for.

The contract in question was signed by Infantino 10 years ago, when he was acting as a director of legal services at Uefa, football's European governing body.

Infantino has since denied any wrongdoing, and Uefa says it is providing police with all relevant documents in its possession and "will co-operate fully".