Celebrity chef Salt Bae has announced today that he is to leave his new London restaurant just six weeks after opening. 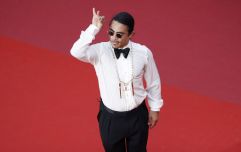 END_OF_DOCUMENT_TOKEN_TO_BE_REPLACED

Salt Bae, known for his memeable behaviour and exorbitantly-priced menu, took to his Insta stories to announce that Sunday will be his final day in London before heading to Saudi Arabia to set up his 28th restaurant.

His London-based Nusr-Et restaurant has come under fire in recent weeks for the prices featured on the celeb-hangout fine dining establishment.

It was recently revealed that staff at the restaurant couldn't even afford some of the more basic portions of food with an hour's wage, prompting questions of the business and its figurehead.

The restaurant offers an hourly wage of just £12 an hour. At the same time, the restaurant sells single steaks for as much as £1,450.

The press attention resulted in a flood of negative reviews on TripAdvisor. One review, which referred to it as "overpriced TikTok food", did not hold back when critiquing Salt Bae's London venture.

They wrote: "We've had far better steaks at all the other top steak houses in London and for a fraction of the price. You pretty much pay so you can show off on Instagram or TikTok. So glad I didn't foot the bill. My director was absolutely appalled at the prices and said he would never step foot in a Nusr-et ever again."

But that isn't to say everyone hates the so-called "most expensive kebab shop". END_OF_DOCUMENT_TOKEN_TO_BE_REPLACED

One positive review focused on the Salt Bae himself, writing: "The piece de resistance was Nusret / Salt Bae himself who put on a heck of a show - brandishing knives that were like machetes which actually had sparks of fire coming out of them, and cutting the steaks with a flourish worthy of the best Turkish fighter ready for battle. Yes, it was expensive but worth every single penny!"

It remains to be seen whether the restaurant's success will continue without Salt Bae himself in attendance as one of the main attractions.