Who saw that coming

Ryanair has won the prestigious accolade of worst short-haul airline for the sixth year in a row.

A survey by consumer watchdog Which? found that customers gave Ryanair the lowest possible rating for boarding, seat comfort, refreshments and cabin environment.

Of those who named one airline they would never fly with, 70 per cent named Ryanair. Overall, the carrier received an overall customer score of just 40 per cent.

Overall Easyjet scored 63 per cent and Which?'s pick of the bunch, Jet2, boasts a customer score of 75 per cent.

In a statement Which? said: "The other names at the bottom of our short-haul airlines rankings were Thomas Cook Airlines (52%) and Wizz Air (54%), a budget carrier mostly flying to central and eastern Europe. Wizz was the only other carrier to share a two-star rating for customer service with Ryanair. Despite this, Ryanair remains out on its own as the worst airline in the UK."

Ryanair's trouble in 2018 started with an announcement that it did not have enough personnel to staff flights, following strike action, in the autumn of 2017. More than 40 flights a day were cancelled, leaving 400,000 people without air travel. 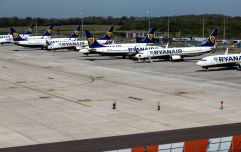 Ryanair says it plans to resume 40% of flights in July

END_OF_DOCUMENT_TOKEN_TO_BE_REPLACED

When Ryanair said it would refuse to pay the travel costs for its customers on rival airlines so they could complete their journeys, as it is obliged to do under EU legislation on rerouting passengers, the Civil Aviation Authority had to step in and force the airline to back down.

Ryanair and the CAA

Similarly, when the Civil Aviation Authority told Ryanair its passengers on cancelled flights were eligible for compensation the carrier refused to payout.

One of the area's cited by Which? in its report as an issue for passengers is Ryanair's complicated system of charging for cabin baggage.

Ryanair has been ranked the worst airline for the sixth year in a row by Which? (Credit: Thomas Lohnes)

One passenger told Which?: "There are too many rules. I worry about getting caught with hidden costs."

A Ryanair spokeswoman said the research did not factor in the price of tickets: "the single most important factor for UK consumers."

She said the airline's average fare of £35 is "a fraction of the high fares charged by Which's 'recommended' airlines."

Rory Boland, editor of Which? Travel magazine, said: "Airfares might seem to be getting cheaper, but only if you don't fancy sitting with your family and children or taking even a small cabin bag on-board.

"Increasingly you need a calculator to work out what the final bill will be, especially with Ryanair.

"It has spent the last two years cancelling thousands of flights, ruining hundreds of thousands of holidays and flouting the rules on compensation as well.

"The results of our survey show passengers are fed up. They should switch to one of their rivals, who prove that budget prices don't have to mean budget service."