Jeremy has denied all wrongdoing and pleaded not guilty. Jeremy pleads not guilty to:

"We must ensure that survivors have all options available to help with recovery, including trauma-informed services for healing and support to report such crimes.” 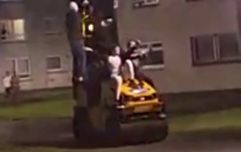 END_OF_DOCUMENT_TOKEN_TO_BE_REPLACED

He has remained in jail since being arrested last summer on $6.6m (£4.8m) bail and is said to return to court on 12 October for a pretrial conference. If convicted as charged, the 69-year-old faces a possible maximum sentence of 90 years to life.

popular
How did Brian Laundrie’s parents find his remains in a few hours?
‘Flesh-Eating’ STD spreading across the UK causing 'beefy red' sores
A definitive ranking of every swear word from worst to best
Crystal Palace fans unveil banner protesting Saudi ownership of Newcastle
Producer says Alec Baldwin should be charged with manslaughter over accidental shooting
Here's how to see who's been taking screenshots of your Instagram Stories
Pizza Hut customer outraged over 'sexual' ketchup label that reads 'shake, squeeze and squirt'
You may also like
News
Man tries to strangle woman, 20, with metal chain in London park
News
Shocking footage shows moment man is killed by his own brothers
News
Nike boss Larry Miller confesses to murdering someone when he was 16
News
Two men appear to pretend to be police to 'enter a woman’s home'
News
Tommy Robinson gets five-year stalking ban after journalist harassment
Next Page