This would be funny if it wasn't the stuff of complete nightmares.

A man in Co Cork, Ireland, was reportedly rushed to hospital after being bitten on the bum by a rat while using the toilet. 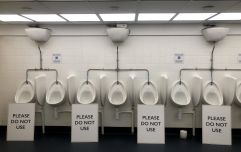 END_OF_DOCUMENT_TOKEN_TO_BE_REPLACED

The incident was reported by local councillor Noel Collins during a county council meeting recently, according to the Irish Sun.  He explained that a plumber had found a broken pipe near to the house, and it's suspected that this is how the rat gained access to the house.

Collins has requested that the council research if it is feasible to flush rat poison through the sewers in order to avoid a repeat rat attack.

“The flooding resulted in another problem for residents, that of rat infestation, which really upset many families, mentally and physically. Indeed, one elderly gentleman suffered a rat bite to his posterior while using his toilet, and had to receive immediate medical attention.

"I would advise homeowners to keep their toilet seats down when not in use, and to watch their posteriors.”